When considering the greatest of the Black wrestlers in history, it is important to look into the past. Most fans would think that BoBo Brazil was the first  Black star, but that title might go to Viro Small, a former slave who wrestled under the name “Black Sam” and won the Vermont Collar and Elbow Championship  twice in the 1880’s. In the 1940’s, the original Reginald Siki starred in Winnipeg and Los Angeles, challenging for the California Heavyweight title. Jim Mitchell, nicknamed “the Black Panther,” began wrestling in the late 1930’s and would match up against some of the biggest stars of his day, including Gorgeous George and “Mr. America” Gene Stanlee. Earl Maynard juggled a hectic schedule, begining as a wrestler in 1960 while also training as a professional bodybuilder. He ultimately was crowned Mr. Universe in 1964 and claimed the National Wrestling Alliance (NWA)’s America’s Tag Team Champion twice  in the early 1970’s traming with Rocky Johnson and then with Dory Dixon before moving on to a career in movies. Sailor Art Thomas left the Merchant Marines to become a bodybuilder, but entered professional wrestling in 1943 and became one of the original strongmen in the sport, eventually challenging Buddy Rogers for the NWA Heavyweight title.  Rocky Johnson served as a boxing sparring partner for Muhammed Ali and George Foreman but went on to challenge Harley Race and Terry Funk for the NWA Heavyweight title.He would eventually team with Tony Atlas to become the first Black wrestlers to hold the WWF Tag Team belts. Jack Claybourne held the Kentucky Negro title and would later wrestle against the greats of the 1930’s and 1940’s including Ed “the Strangler” Lewis and “Whipper” Billy Watson and starred across Europe, Canada and the Pacific Islands. Woody Strode was a renowned athlete having starred along with Kenny Washington and Jackie Robinson in football at UCLA and became one of the first Black players in the modern NFL. His athletic fame kept him in high demand as he faced a slew of stars including Gorgeous George before he transitioned into a feature movie star. Big Daddy Siki had the nerve to exude the an arrogance reserved only for Gorgeous George. With a head full of blonde hair he was a major draw in Madison Square Garden and Maple Leaf garden and held various NWA titles belts as a star in Canada and the United States. That these wrestlers achieved such success is credible, but to have done so while facing blatant segregation and racism in and out of the ring is a testament to their struggles and will to success in spite of them. Of these and other great early wrestlers, Luther Lindsay stands as one of the greatest and most respected Black wrestlers in history. 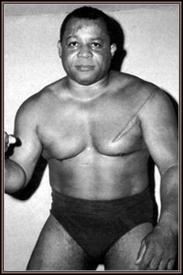 Luther Lindsay was not only a pioneer in the sport, he was one of the most respected performers of his day, Black or White. Unfortunately, he is relatively unknown in the minds of most current wrestling fans.

Throughout much of the 1950’s and 1960’s, Luther was a contender and the titleholder of the U.S Negro Heavyweight Championship, wrestling against other Black performers such as woody Strode, Jack Claybourne, Dory Dixon, Sailor Art Thomas and Bearcat Wright (due to segregation in much of the south, Blacks were only allowed to wrestle against one another). Eventually, Lindsay’s talent could no longer be ignored nor limited in competition. The great Lou Thesz once said about Lindsay “”[Lindsey was] without question, the best black wrestler ever. Luther had a fantastic body and limitless energy to compliment his skill. Like many other industries, wrestling was not open to African-American wrestlers during his career, so it was an amazing accomplishment for Luther to even learn his craft. His place in history is not because he was black; it is in spite of the fact he was black.” Thus Lindsay would get the opportunity to wrestle against the greatest wrestlers of his day. Among many high-profile matches, he wrestled for the vaunted NWA Heavyweight championship against Thesz 11 times as well as against later champions Billy “Whipper” Watson, Pat O’Connor and “the Nature Boy” Buddy Rogers. In addition to holding the Negro Heavweight championship, he held the Pacific Northwest championship four times during the 1960’s. He also competed in the tag team ranks often with Shag Thomas (The two captured the Northwest Pacific Tag Team titles four times). He would be a Tag Team title holder an impressive 15 times, perhaps most impressively when he teamed with Ricky Waldo to capture the All Asia titles against Toyonobori and the legendary Rikidozan in 1962.

A tremendous college athlete who later played professional football with the Hamiton and Victoria franchises in the Canadian Football League, Lindsay was an accomplished technical wrestler, Luther was considered on of the top submission wrestlers of his day, training with Don Leo Jonathan and Stu Hart. Performing for Hart’s Stampede Wrestling in Canada in 1967, Lindsay’s match against broke the attendance records for Calgary.

Lindsay was still active in the ring in 1972 when he met Bobby Paul in a match in Charlotte, North Carolina. After winning the match  after performing a flying belly flop, Luther died from a heart attack in the ring.

In many areas that he wrestled, Luther Lindsay was the first Black performer to have an opportunity to wrestle against that region’s White champion and to have been admired enough to challenge four NWA champions for the most prestigious belt of the time explains the significance of his career and the trail that he blazed for the who would follow.

According to Hisaharu Tanabe’sWrestling-Titles.com the following held the World Negro Heavyweight Title: