MENG: STORIES OF THE SCARIEST MAN IN THE HISTORY OF WRESTLING 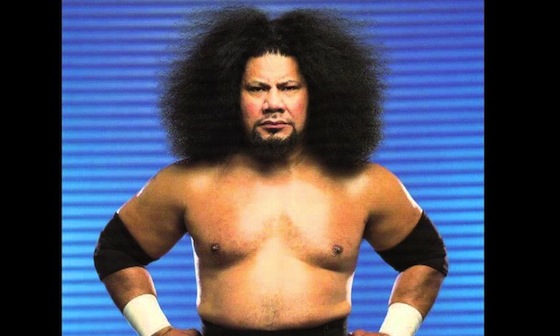 It’s one thing to be a popular professional wrestler in the ring. You have T-Shirts printed up with your catch phrase on them and action figures that simulate your finishing move. You’re loved by the fans and everyone knows your name. It’s another thing to have the respect of your peers.

Some of the most popular wrestlers were considered soft by others in the locker room. There are numerous stories of altercations that caused guys to immediately become respected, but there’s one man that stands above all the rest. He was considered the most terrifying man in the sport and was feared by even the toughest wrestlers.

His name is Meng and the tales of him have become those of Chuck Norris jokes. No one knows for sure which stories are true and which ones have been embellished. One thing we know for sure is that no one gets that much respect without having pulled off some truly unbelievable acts. Here are the stories from other wrestlers about the scariest man in the history of wrestling. This is the legend of Meng (aka Tonga, Haku).

The Bite
Kevin Sullivan was a wrestler/booker in WCW and traveled with Meng quite often when they were on the road. He told a story to WWE Classics about the time the duo went to a tavern to grab a few beers before heading to their hotel. According to Sullivan, it was obvious that he and Meng weren’t locals, so when they walked into the bar, a guy playing pool called Meng a horrible, derogatory word.

“The next thing I know is that Meng goozles the guy like Mr. Spock,” Sullivan said. “It was fast and furious. He then grabbed another guy who tried to get involved and knocked him unconscious.”

After that, things got even crazier. “Meng bit through the guy’s shirt like a wolf, bit a chunk out of the guy’s back, then spit it on the floor,” he said. “I said, ‘It’s time to go.’ ”

Sullivan said that as they drove from the bar he saw police cars pulling into the parking lot, but authorities didn’t pursue them and no charges were ever filed. 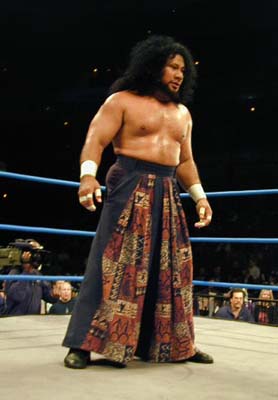 The Airport Incident
In an interview with James Guttman of World Wrestling Insanity, Meng discussed how he wrestled to support his family and not for the fame or popularity. That’s why he took particular offense when anyone called wrestling fake.

“When I walk in and you tell me it’s fake, I’ll show you how fake the business is. Whether I take your teeth out or take your eyeballs off or whatever it was in those days. Maybe they’re going to kick my butt around, but watch it – I’m coming back and finding you. But those were those days. I’m glad nobody picked up a gun and shot my ass. But in those days, that’s how it was, James. It’s my love for the business.”

He then confirmed that one of the most outrageous tales about him was indeed true.

“Yeah. It was in Baltimore Airport. There was a hotel there. We were staying at another hotel – the Marriot or something. There was another hotel there, though. It was hopping at the time. The music was playing and it was packed. It was during the week I believe. Me and Siva Afi went over and there were lots of babyfaces there at the bar. So we went and sat in the other corner away from them. When they were ready to close, we had a few drinks, and on our way out there were five guys just sitting there. Of course, the same thing came out. The “fake” stuff. “Hey, are you guys with those guys – wrestlers? The fake wrestlers on TV?” You know. I said, “Yeah. I’ll show you.” And I reached over without thinking – there are four other guys there (laughs) – grabbed his face, and bit his nose off. Then the fight started. Me and Siva kind of cleaned house there and left. I’ll never forget it (laughs).”

Perry Saturn
During his YouShoot Interview, Perry Saturn was asked about his time in WCW and the toughness of the guys backstage. He was given the followng list of the guys with the strongest reputations of being tough and asked who would win a fight between them all.

He responded “Tonga. Nobody else would stand a chance. Not even a question. He could kill everyone without blinking and there is nothing anyone could do about it”

Ted DiBiase
The Million Dollar Man said that one time they were in a rough part of St. Louis for a show. Everyone had been drinking and a large fight broke out, which resulted in the police showing up. Meng had a few drinks, but saw the fight break out so he started trying to break it up. In the process, police thought he was part of the fight and maced him then handcuffed him. He said that Meng was cuffed behind his back, looked at the police, and snapped the handcuffs.

Bobby Heenan
In a shoot interview, Heenan talked extensively about Meng and referred to him as the toughest man (not just wrestler) he’s ever met in his life. The craziest story he shared was in regards to a bar fight where he claimed Meng “took his two fingers on his right hand, his index finger and trigger finger, and he reached into the guy’s mouth and he broke off the guy’s bottom teeth.” Heenan said that if he hadn’t been there and seen it himself, he wouldn’t believe it. After all the other stories that have been confirmed, it doesn’t seem that unbelievable at all. Heenan was also close friends with Andre the Giant and claimed that the only two men in the word that Andre feared were Meng and Harley Race.

Rick Steiner
The Steiner Brothers were known for being tough guys, so when a man is feared by two of the hardest guys in the sport, you know they’ve seen some crazy things. In an interview, Steiner talked about the time Meng fought off eight police officers. “They shot him with mace and he closed his eyes and sucked it in. He just opened his mouth and took a deep breath. I mean some of the stuff he did was like, ‘What the hell?’ Scotty and I always thought we were tough guys but that was before we met Meng.”

Arn Anderson
In his biography, “Arn Anderson: 4 Ever” Anderson claims that there are three types of men in the world. There are tough men, there are wrestler-tough men, and then there’s Meng. He was in a completely different category than anyone else on the planet. Anderson recalls one instance where a large cowboy was arguing with Meng and he pushed the cowboy through two different sets of doors using only one hand.

Brutus Beefcake
One of the most famous Meng stories happened during his time as Haku in the WWF. Brutus Beefcake had gone to management and complained that Meng slapped him too hard during their match. When Meng found out he walked straight to Beefcake’s locker room and grabbed him out of the shower. He started choking him and lifted him two feet in the air while everyone else looked on because they were too scared to step in and break it up. Eventually Hulk Hogan came in and talked Meng down.

Eric Bischoff
There are so many stories about Meng fighting with other wrestlers, but that doesn’t mean management wasn’t just as scared of him. Former head of WCW, Eric Bischoff has said numerous times that Meng was never fired from WCW because no one was brave enough to do it. On one particular day, Bischoff and Greg Gagne walked into the locker room and interrupted a conversation between Meng and Chris Candido, Chris Jericho, and Tammy Sytch. Meng immediately looked at the pair of execs and said, “Hey! Apologize to my friends. I’m talking to them.” According to Candido, the entire room went silent and everyone just froze. It was then that he realized the stories about Meng weren’t just legends. Bischoff and Gagne apologized to them and waited for the conversation to finish before speaking with Meng.

Jesse Barr
On a trip to Puerto Rico, Meng was walking with fellow wrestler Jesse Barr when Barr decided to kick dirt onto a man who was digging ditches. Meng was upset by it and told Barr he shouldn’t have done it. Barr decided to get in Meng’s face and argue with him, which turned out to be a bad idea. Meng grabbed him and popped his eyeball out of socket. Some wrestlers claimed he completely tore it out, but Meng said that wasn’t true. Barr ended up getting fired for the incident.

Kevin Sullivan
During Kevin Sullivan’s numerous shoot interviews, he’s spoken extensively on his time working with Meng. He claims that on one occasion when Sullivan was a booker in WCW, he asked Meng to do something that wasn’t major, but it wasn’t completely the right thing to do. He said that Meng got a little upset and it was most scared he’s ever been in his entire life, despite Meng not being that angry.

Sullivan also used Meng to his advantage. Sullivan had to inform a few guys that they would be losing an upcoming match. They wrestlers became upset and told Sullivan they refused to do the job. Sullivan told them that, instead of arguing, he would just go get Meng and have him take care of the situation. They guys immediately agreed to lose their matches if he promised not to go get Meng. 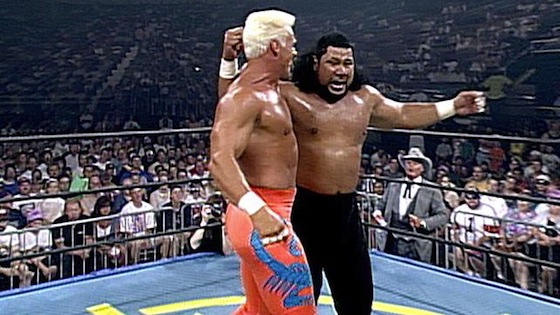 Sting and Meng in the ring

Jake Roberts
Jake “The Snake” may have said it best during one of his shoot interviews: “If I had a gun and was sitting inside a tank with one shell left and Meng is 300 yards away, he’s mine, right? Well the first thing I’m going to do is jump out of the tank and shoot myself because I don’t want to wound that son of a bitch and have him pissed off at me.”